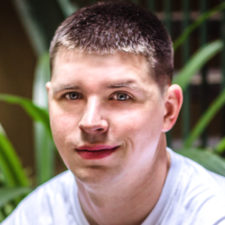 C.J. Barr hails from southern Louisiana, where the voodoo is real and the ghosts are out to get you. In his own words, "I grew up going to my dad's WWF matches, and loved listening to the announcers, which sparked a passion for voice acting and narration. We'd end up watching monster movies and shows like Tales from the Crypt after the matches, which is probably why I'm borderline obsessed with the horror genre. Though I took on roles in high school theater and participated in projects my classmates would work on, I didn't begin taking on roles in film until I joined the military. While working as an aircraft maintainer on F-16 in the Air Force, I began taking part in student films, and voice acting work. After leaving the Air Force, I began working at a (name withheld due to legal reasons) prestigious rocket company testing, inspecting, and assembling componets of various rockets. Due to the demanding hours required by said company, I halted my pursuit in acting until this year when I started my YouTube channel. I am grateful to every single one of my viewers, and strive to give them the best narrations possible. I am very excited to take part in this competition, and am curious to see where this leads in my ultimate goal of becoming a voice actor."

I Have the Power to Pause Time

I Found a Human Tooth in My Pocket