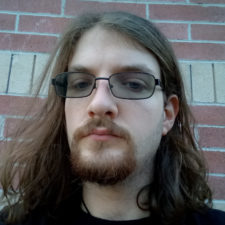 Max has listened to Chilling Tales media for a few years, often using it to pass time during overnight shifts. His love of horror stories grew from late nights and weird books in the school library with creepy artwork. From there he found love for the classic and contemporary, finding Poe and Lovecraft alongside Danielewski and Barker. He searches for stories that will keep him awake at night. And after finding Chilling Tales, now wants to be the storyteller that tingles the spine and raises the hair. He finds inspiration from bands such as Slipknot, King Gizzard and the Lizard Wizard, as well as art by Zdizlaw Beksinski. He cites Jacob Burgess (Where the Water Tastes like Wine, Baldur’s Gate: Siege of Dragonspear) and Graham Stark (Arcade Spirits, LoadingReadyRun) as his inspiration to pursue voice acting. You did this. Max writes columns for The Geek Embassy under the pen name Crab, discussing MtG and horror as well as books and films.