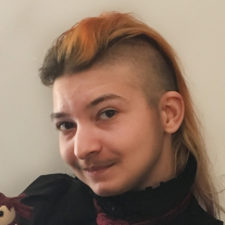 Reagan C.S.R. self-identifies as a hellion and claims to be a one-person team that writes, illustrates, and doesn’t know how to shut up so they decided to get into voice acting instead, playing both male and female roles (and still waiting for the day they can voice a non-binary character). He’s been passionately writing and creating his work ever since he was young and at one point picked up the idea of voicing some of it himself, alongside opening doors for others to get more voice work through his content. As the narcissist that they are, C.S.R. has a habit of always casting themselves in their own projects but has recently been getting roles in other people’s, such as the main character, Jaden Riley, in an upcoming RPG, Aberthny Manor. As a queer, polyamorous trans person, he is a big advocate on representation of the LGBT+ community and recognizing how differences are beauty. They try to spread as much positivity and compassion as possible, always encouraging the actors cast in their projects to build a community with each other and build one another up.