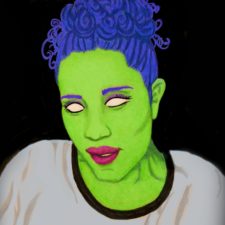 Tonya Hadrow is a voice actress and YouTube narrator. Halloween is her favorite holiday, and she has always been intrigued by the darker, creepy things in life. "I love to entertain and have worked in broadcast television for 20 years," she says. "When I worked in television I was a voiceover talent for local commercials, video editor, audio engineer, computer graphics generator, technical director, camera person, stage manager, and producer." Aside from that, Tonya has been an extra in several small films and has worked with Sony Pictures on the movie "The Motel Life" and their web series "Backwash." In the past two years, she has decided to step away from television production and become a teacher. "Even though I have made a career change," she continues, "I have my YouTube channel where I can act, edit, and create. I shoot my own videos and edit all of my content." Her favorite color is green and she really does have blue hair, and her favorite horror movies are "The People Under the Stairs", "Hellraiser", "The Taking of Deborah Logan", "Children of the Corn", and "Dreamcatcher".

Skip to the End

Written by The Vesper’s Bell