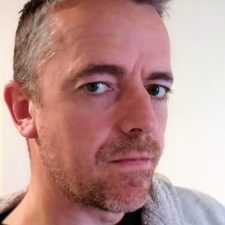 James Croft was born and raised in Adelaide, Australia, but has been living in Melbourne for the last 20 years. By day he's a graphic designer and sign-writer, both of which he's been doing for a number of years. "I had never considered doing voice acting or voice overs until fairly recently," Croft says. "However, as a child, my father was a pilot and air traffic controller, while my mother was a court reporter. My step-mother was an audiologist. So I was influenced from the very beginning, and raised to speak clearly and with correct enunciation." As a teenager, Croft was a radio announcer on community radio. Later he went to radio school and worked as a spruiker in shopping centers. Then, over 20 years ago now, he moved to Melbourne to take a role as an air traffic controller. "I always seemed to fall into positions where, for hours upon hours every day, my voice was important," Croft continues. "But I never considered its importance. Then, one day, I took a different path and left it all behind. Until recently, it was like an itch I couldn’t scratch." In Mid 2018, Croft performed minor voice over roles for a handful of clients. Before long, he found himself doing numerous voice over and voice acting recordings nightly. By the end of the first week he had invested in a quality microphone and fitted out a section of his house with soundproofing. These days, he is the narrator for several YouTube channels, performs roles in various web series, and provides voices for characters in a couple of games and countless other works. "It feels like coming home," Croft adds.

The Beast of Stone