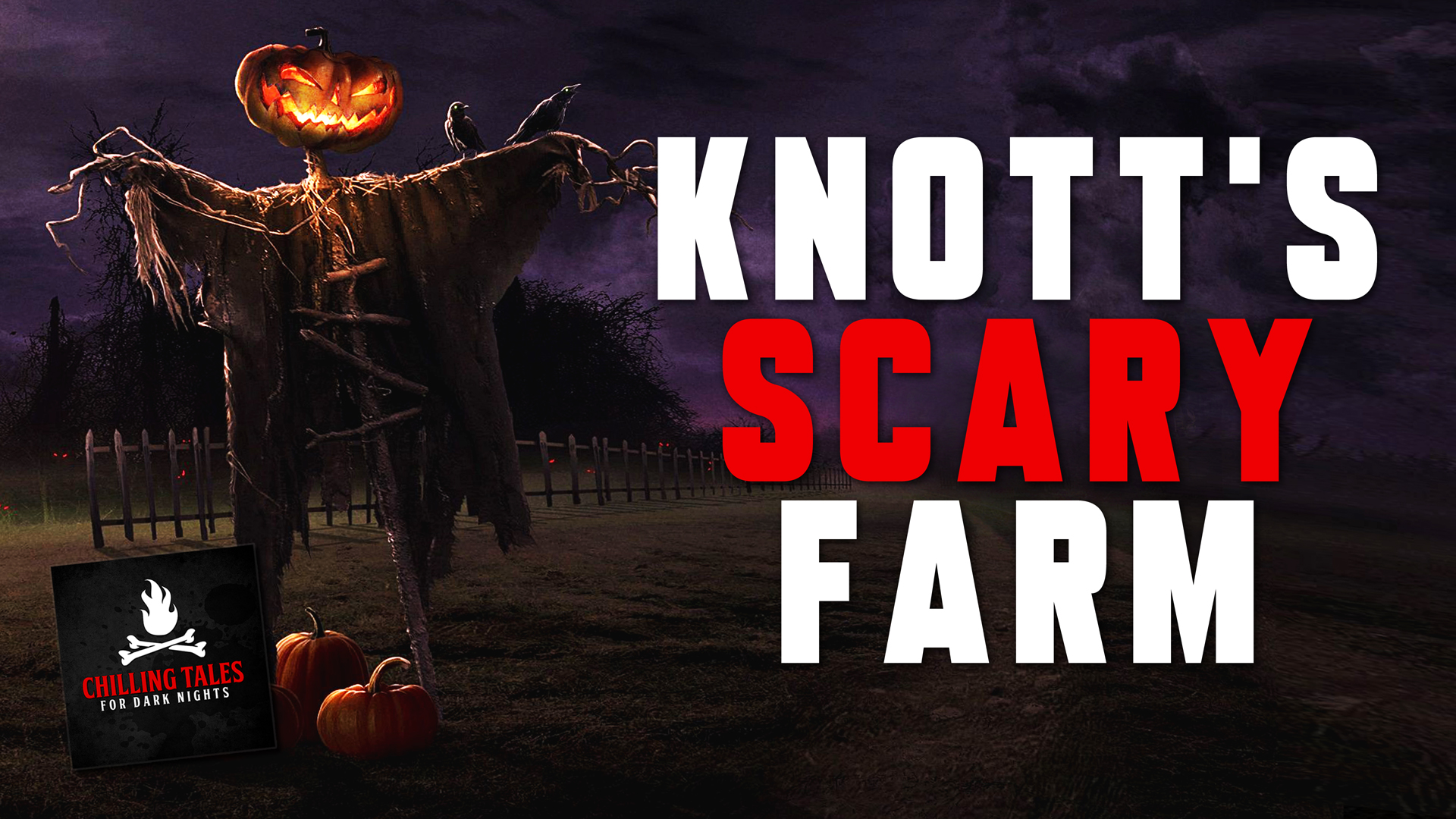 Have you ever been to Knott’s Scary Farm?

I went last night. My wife and I stood in line for almost two hours, freezing half to death. After the first hour, once we’d moved up quite a bit from where’d we’d started, that’s when I first noticed the smell. It was awful. It was rotten, rancid, like milk that had been left out in the sun for a week, and it struck us every time the wind blew heavily. We got used to it after a while, and we soon thereafter stopped paying any attention to it.

We were in line for “Paranormal Inc.”, a haunted attraction set in a hospital. The farther up we moved in line, the louder the sound effects of the haunt and the accompanying screams of guests got. The reviews had all been stellar, and the comments we’d overheard from people leaving the haunt as we waited in line were all very positive, so we were very much looking forward to going through.

When we finally reached the front of the line, we were shepherded into another group. Our group of eight was led to a set of hospital doors, and with that, the haunt began. There was an intro ala “The Haunted Mansion”, then we started through the hospital doors with four of the rest of our group in front of us, and two behind. The theatrics were impressive, the production value apparent, and the mood was decidedly creepy. It genuinely looked like we were in a run-down hospital.

The lights went in and out, and every short while some kind of monster, spirit, or otherwise nefarious ghoul would jump out at us. The people behind my wife and I seemed to be the most scared of the bunch; the teenage boy and who I assume was his girlfriend clutched at each other like they were legitimately afraid for their lives. About four minutes into the Paranormal Inc. maze, in an area that was pitch black, the four in front of us somehow went right when we were directed to go left.

That’s when everything started.

We and the couple behind us went through a door to our left then walked down a short hallway, and as we did, that smell from outside came back, and it was much, much stronger. We eventually found a door on our right and when we went through it, we found the source of the smell: a morgue. There were two tables with extremely realistic looking corpses on them, and countless more bodies and blood strewn about the area. Just then, a man stepped out of the shadows, but it wasn’t quick and jolting like a normal scare…this man, dressed half like a doctor and half like a butcher, stepped out of the shadows in the corner slowly, deliberately.

He just stood there for what felt like forever, until he finally shouted “WHAT ARE YOU DOING IN HERE?!” and began sprinting towards us, cleaver in hand. We all jumped and I led the group over a few of the bodies and through a door on the opposite wall. The tone of the haunt had changed; at first it was lighthearted and creepy, but at that point it was legitimately scary. Speaking only for myself, at that moment, the haunt was great.

We went through the next closest door, and found ourselves in near-pitch black yet again. I was still leading the group, and as I took short steps forward my shoulders started bumping into things that swung when I hit them, letting me know that whatever they were, they were hanging from the ceilings. The smell was even worse yet in that room, and a sudden burst of pressurized air made us all scream. We made it to the end of that room, and when I opened the door, the room we’d just gone through flooded with pale yellow light, and I was able to see what was hanging from the ceiling: bodies on meat hooks. I was really loving the realism of the haunt.

The next room had nothing in it, just some boxes, same with the room after that. We heard some screams coming from elsewhere but we figured it was just people from other mazes, though we did question where the other half of our group had gone. We went under a blue tarp and found ourselves back in what seemed to be a normal area, not the small storage rooms we’d just passed through.

Strobe lights led us forward as we moved down the hall, false boards on the walls made way for reaching hands, making the girls shriek. As we reached the apex of an adjoining hallway, something came hobbling out. A woman leaned against the wall, her left leg removed at the knee, blood and sinew falling from the found.

“Help me…” she said weakly as she reached out for us. “Please…this isn’t par…”

Her voice trailed off and she fell to the floor. My wife and I pressed on, walking past the one legged woman and turning towards where she’d come from, but the couple behind us were hurriedly led away by two women in bloody nurse uniforms, and I distinctly heard one of them ask “where are the other two?”

Kimmy and I rushed down the hallway and through yet another door, this one leading into what looked to be like a recovery room. There were people strapped down to beds, people with missing limbs, people with phenomenally done makeup to look as if their eyes and mouths had been sewn shut huddled in the corners of the room, and prop dead bodies all around. We went through the room amongst the moans and groans of the actors and through another tarp, finding ourselves not far behind another group.

We caught up to the group in front of us, none of whom were anyone we were with earlier. People again began jumping out of corners, from behind doors, hanging down from the ceilings; normal haunted attraction fare. Our new group went into another room, this one had body parts on hooks hanging from the ceiling, flies buzzing around every last one of them. The smell was again very prominent, the rotten, old, eye-watering stench.

Thick, wet fog permeated the next room as people in ghostly makeup and attire scared the shit out of us. We went through two more rooms with this group, rooms that were more of your standard haunted house attraction antics, but we soon enter an area set up like a waiting room. The rest of our new group pressed on, but we saw the young man from earlier sitting in one of the chairs, motioning for us to come over to him, and we obliged. He told us that he’d gotten separated from his girlfriend, and that the staff he’d alerted told him to wait there, which seemed odd to my wife and I.

The three of us began making our own way through the Paranormal Inc. Hospital haunt. We went through a series of tarps, stepping across hallways we’d once gone down as one normally would, in the areas that we presumed staff set up. We eventually found what looked like an operating room, a room we’d passed by completely earlier. The operating table had a dismembered body on it, with flies buzzing all about, and that smell…it was as strong in there as it ever was.

It was eerily quiet in that room, I remember, like all the noise of the surrounding haunt had been put on ‘mute’. That’s when we heard the man’s girlfriend calling out for him.

After letting her know we’d heard her, we ran our way through the maze using the sound of her voice as a guide. We finally met her, and she was terrified that the body parts that were hanging up had been real, the dead bodies in the morgue real, all real. She also said that someone had been stalking her as she tried to find her boyfriend.. My wife and I were skeptical, of course, but regardless, we wanted to get out of there. Just as we resolved to find the exit, the half doctor/half butcher appeared from a corner and began to chase us.

We moved down hallways, through doors, under tarps, behind walls, all while this man  was right behind us, screaming obscenities, telling us that we “shouldn’t have ever been back there.”. We burst through a tarp, and I was the first to fall. My foot caught something and I toppled over, with the other three toppling over me, but instead of our screams we heard the screams of a different group. We’d fallen our way back into the main track of the Paranormal Inc. Hospital, just a few feet in front of another group. From behind us we heard rapidly departing footsteps.

We scrambled to our feet and fell in with the rest of the group. A few more ghoulish actors and jump scares unnerved us further, but we eventually came out the other side of the haunt. Naturally, we were curious about the things we’d seen inside Paranormal Inc., so we approached a member of the staff and inquired.

According to her, there is only one morgue in the maze, and it features a number of animatronic ghouls. There is no recovery room, and certainly no actors with their mouths and eyes made to look as if they’d been sewn shut. She had no explanation for what we’d seen, and was a bit brusque in her response.

I think Knott’s Scary Farm uses actual people for props in their attractions, and I think we were lucky to make it out.