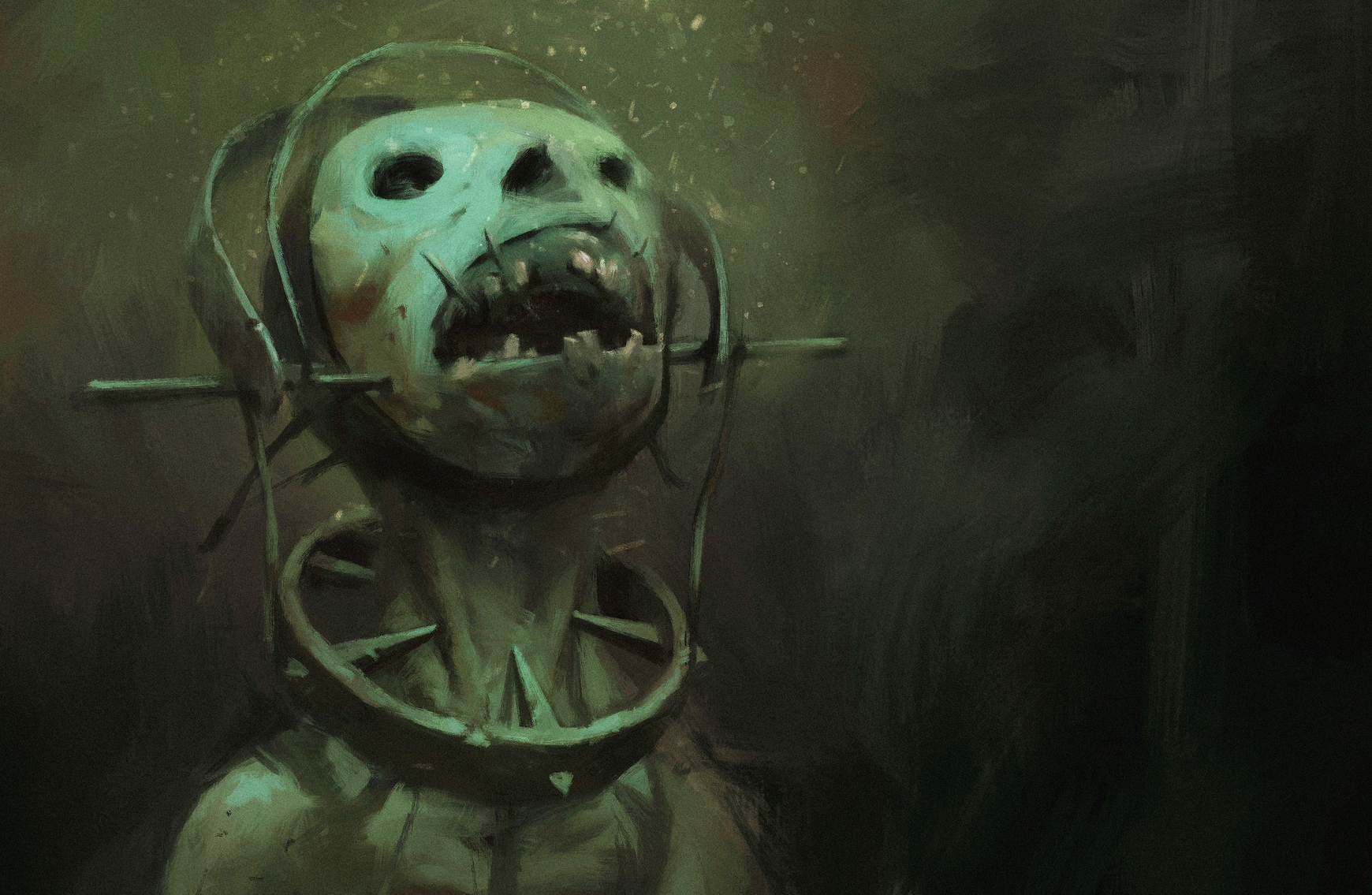 My family has never been high-class. My dad is a drunk, constantly out of work, and he yells more than he talks. My mom yells back just as much, but at least she doesn’t drink; she takes her anger out on the rest of us by cooking terribly. My older brother has been in juvie three times, and the way he keeps at it, he’s going to the real thing the next time he gets in trouble.

We all live cramped together in a five-room trailer that sits in an old, poorly-maintained lot near the outskirts of town. People have complained for years that it’s an eyesore, but because my great-grandfather actually purchased the land outright, there’s nothing they can do to get rid of us directly. So, the town tries to make our lives miserable whenever they legally can, be it through bullying at school or by making us unwelcome at nearly every store in town (except the liquor store; they love my dad there).

It’s a crappy life, but it’s all gotten so much worse since Dad found that thing on the side of the road.

You see, my dad loves to collect stuff on trash day so he can sell it to the dump and get a couple bucks for it. It was early in the morning, just before sunrise, when he found the “mannequin” that he thought might have some value. It wasn’t in anyone’s trash pile, it was just sitting there in the dark. He loaded it into the truck and drove it home.

It was definitely shaped like a mannequin, but unlike any I’d ever seen. It was strange and oddly-proportioned, like the odd monuments you see sometimes at carnivals. It was completely black, with fake, mop-like hair that hung over its face – a face that had no eyes, but a huge, painted grin. I don’t even know why my dad thought picking it up off the road was a good idea, but he loved it, that I know. He even reconsidered selling it, thinking it might be worth keeping after all. He set it in a back room that we normally used for storage, and for a few days he left it there, to sit.

It wasn’t long before he decided to tinker with it, and in doing so he discovered a wind-up key in its back. He turned it, and the thing actually began to move. The arms flailed, the legs moved back and forth, and the mouth opened and closed.

And then it spoke.

“I’m hungry! Feed me!” it said this in a thin, unpleasant voice, which sounded like it had been filtered through an old vinyl record player or an antique music box. To my surprise, my dad thought it was great and kept on messing with it, but it only ever said that one thing.

That is, until the night I woke up to my dad screaming.

I ran into my parents’ room, and even though I could smell the alcohol in the air I knew my dad wasn’t drunk enough to ignore the figure standing next to his bed, crying out, “I’m hungry! Feed me!”

“Feed… feed you what?” my dad asked. He had the covers pulled up to just below his chin, just like I should have been doing at that very moment.

No one had turned the little key. It was doing things all on its own.

Instinctually, my dad grabbed the thing and tossed it back in the storage room, and locked it shut. But we could still hear its reedy voice, calling for its meal… insisting on meat. My mom went to the store the next morning and bought some ground beef, only unlocking the door long enough to throw it in, not even looking to see what the figure was doing.

We heard movement inside, followed by more demands. “Not raw!” it cried. “Cooked!”

My mom bought more meat at the store, as she had no intention of going back inside the room to retrieve the leftovers. She fried it up and threw it into the room.

We heard more noise. For a day or two afterwards, we were treated to silence. Then, it spoke again. This time, its voice seemed louder, more forceful. “Cooked! Not fresh!”

My dad, not really knowing what to do with it now, shouted back, “You have rotten meat in there! Eat it!” But it wouldn’t take no for an answer. It trotted back and forth across the floor, stomping like a horse on its back legs, banging on the walls, until my dad relented and opened the door. He found the figure hunched, crouched and unmoving upon the floor, like a dog waiting for a treat. The room stunk from the beef my mom had thrown in there. My dad scraped it up, gave it to her to prepare – which smelled even worse – and heaved it back into the room.

None of us slept during the time it was quiet. My grades in school began to suffer. My brother became restless, but my parents took it worst of all… they started talking about it, wondering how it worked, why it worked, what made such a thing possible.

They started to believe that maybe it was magic, or possibly even divine. My dad drank even more heavily than usual.

When it spoke again, it was even more well-pronounced, its voice far more natural sounding. “Meat! Cooked! Not fresh! Not animal!”

I was in bed when I’d heard what it said, and I refused to set foot outside of it. My dad, on the other hand, did something I certainly did not expect. He grabbed a shovel and stepped outside the trailer. I heard the truck reverse down the driveway, back into the road, and pull away. While he was gone, the mannequin-like thing began galloping in earnest once more, its heavy feet thundering across the vinyl floor, back and forth, back and forth. Not only that, but it had now added short, shrill, toddler-like screams to its list of unsettling activities.

My dad returned hours later, covered in dirt. He asked my mom to help him with something outside. I finally got up the nerve to watch them unload something wrapped in a tarp from the truck.

I stayed in my room, watching from the window. I heard a thumping outside, like when my dad occasionally chopped wood. Then the door of the trailer opened, and a gag-inducing stench wafted in. Then I heard my mom turn on the stove. I didn’t want to know what was happening, even though I knew, deep down, what my dad had done. I didn’t sleep; I think I fainted.

I woke the next morning to absolute bedlam. I came to my door to see my brother in handcuffs, being led out to a police car by two officers. My dad was yelling at him, wondering how he could have done such a horrible thing.

They had pinned everything on my brother.

This would be the last straw, it had to be. I was certain of it. But when I saw the car pulling away, there my brother was, in the back, smiling broadly. I then realized he gave himself up, anything to get out of the house… and he had left me to fend for myself.

My mom and dad came back to me, hugging me, but not very warmly. They told me everything was going to be all right, that my brother was going away for a long time, and that I was going to stay here, with them. I couldn’t possibly want to leave them all alone, right? Well, did I? If I did, they said, I would surely be the most ungrateful little boy.

I never returned to school. My parents had suddenly decided I didn’t need to go. School was where rumors got started, they said, and rumors had to be contained, not spread. That is, until the world was ready to know the truth, anyway. That was how they referred to it. “The Truth.” I could practically hear them capitalize the word when they spoke.

And then, it spoke once again. Louder still, approaching a roar. “Meat! Fresh! Not animal!”

My bedroom door opened. My dad ran in and held me down, while my mother hovered close by, a cleaver at the ready.

There was nothing left of the people I knew in their eyes. Only sleep-deprived insanity.

What they didn’t know was that I had taken precautions. My brother had more than one switchblade in his collection, and my dad didn’t notice that I had acquired one of them until the moment I buried it into his wrist.

While he grabbed it, I dove under my mom’s legs, and clambered out of my room. I ran to the door of the trailer, but my dad grabbed me again, holding me tightly.

“Meat! Meat!” The door to the storage room began to buckle as the atrocity opposite it pounded with all its strength. “Where is my meat?!?”

At the top of my lungs, I shouted, “THEY HAVE IT!”

I heard the door burst open. I heard a roar. I heard my mom scream. My dad let go. I dashed from the trailer. I sprinted as fast as I could into the woods and into town, and never looked back.

I ran until I arrived, breathless, at the police station, and told them all that I could without sounding crazy. They wrapped a blanket around me, made me a cup of hot chocolate, and treated me more kindly than I’d ever been treated by my own parents.

An officer returned from the trailer two hours later. At first he had found it deserted, or so he thought. What he did find, it turned out, was a sticky mess in the storage room, and something boiling in a pot on the stove. It looked like a hunk of meat, but he needed someone to come identify it, since it didn’t look like any meat he’d ever seen.

Of the ravenous monstrosity my father had made the mistake of bringing into our home, there was no sign at all. And I pray it stays that way.