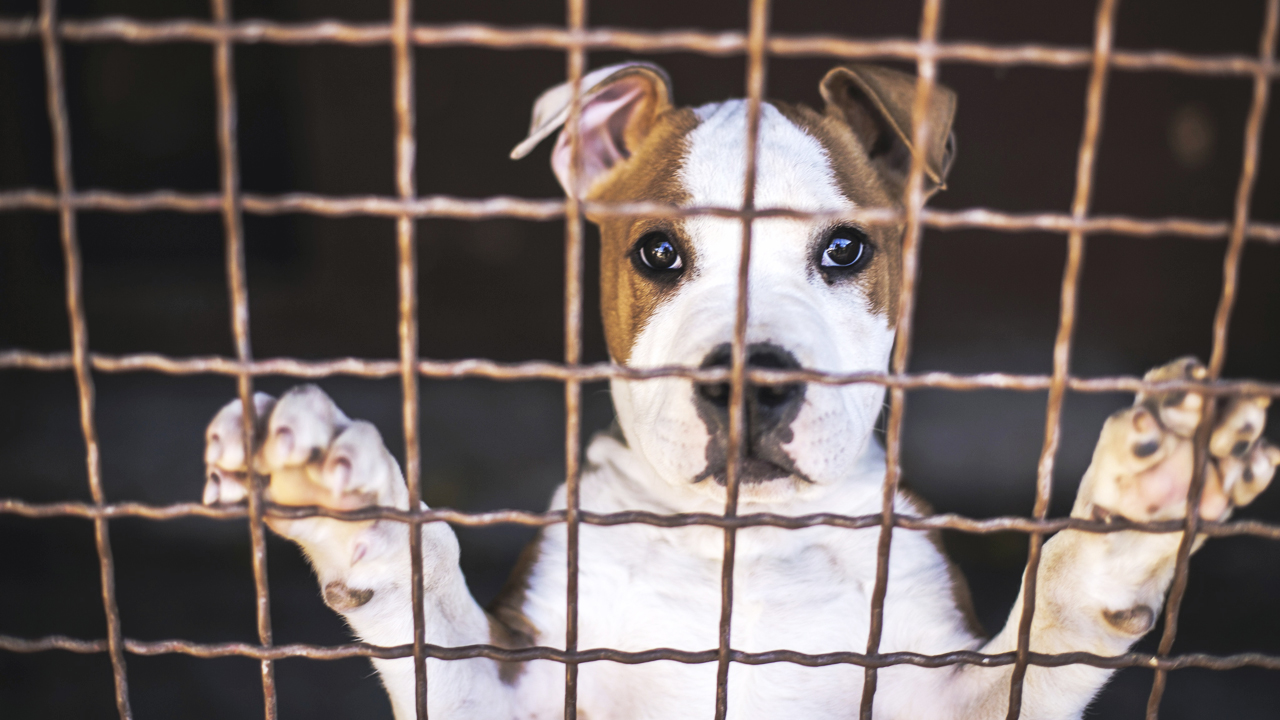 Posted at 00:00h in by Chilling Tales for Dark Nights 1 Comment

The little girl stood outside the door. She stared at it, fidgeting with the frills of her dress. She could always wait until tomorrow… No. She had to ask now. She wanted it and she knew she wasn’t going to change her mind anytime soon. Stepping forward, she knocked on the door. Her small hand seemed to disappear in the shadow of the dark aged wood. She heard a voice from behind the door.

She reached up on her tippy toes to grab the handle of the door and turned it. The sheer weight on the door worked in her favor and it swung open. She stepped through the open door into the brightly lit room.

Inside, at the far end of the room, sat a large desk. At the large desk, sat a man. He was going over papers, shuffling them around and making quick notations with a shiny silver pen. The girl marched up to the man sitting at the desk.

“I want a doggy!” the little girl said, or rather, shouted at the man. From the look on his face, this was not the first time they had had the conversation they were about to have again.

“Sweetheart, what did I tell you last time?” he asked.

The child was taken aback by the question. There was usually screaming on both sides by now.

“Um… you said that I… that I wasn’t res… resplonsible enough last time?”

The unfortunate incident with the goldfish.

“Yes, and if you weren’t able to take care of a goldfish, I’m not sure you’d be able to handle a dog.”

“But… but… but…” tears were welling in the young girl’s eyes as she sputtered. The man, who was now facing her in his swivel chair, creaked the chair forward and held the child’s face in his hands.

“Here’s what we’re gonna do, sweetheart. I’m going to give you two weeks to prove how responsible you are. Getting up for school. Packing your own lunch. Being in bed by bedtime. If you can do that for me, without me having to remind you, for two weeks, I’ll get you a dog.”

Her tiny face seemed to explode in sparkles of joy, “You really mean it?!?”

“Yes, but it’s two whole weeks. That’s fourteen days. You think you can do it?”

She placed her hands square on her hips, her face scrunched in determination. “Okay!”

The next two weeks were tense and arguably the longest of her life so far. She cut it close, but he never had to remind her. With the exception of having to intervene when she tried to make peanut butter by smashing peanuts and margarine together with a hammer she found, everything went surprisingly smooth.

“Yes?” the man answered, not looking up from his work at the desk.

“And?” the man asked, seeming to lead the witness.

“And… I did everything you told me to!”

“You did?” he swiveled around in mock surprise.

“Hmm…. I don’t know… I think maybe we should go for another two weeks just to be sure…”

“Oh, all right!” The man scratched his chin. “Now, what was I gonna get you… Oh, I remember… a baseball! Right?”

The girl laughed. “No, Daddy! Not a baseball!”

“Well, then I was probably gonna get you…a scooter!”

The girl laughed even harder. “No, Daddy! Not a scooter!”

He threw his hands up in mock exasperation, “Well, if its not a baseball and its not a scooter… What could it possibly be?!”

“A doggy!” the girl shouted.

He smiled warmly at the girl, “A doggy! Of course! Let’s get moving! Come on! To the pet store!”

Getting up from his desk, the man took the girl’s small hand in his and lead her out of the room. They walked the length of the hallway and then made their way down the stairs to the first floor. The girl hummed a song she made up. Once on the first floor, the man led her to the door of the basement. A small plastic sign reading “Pet Store” hung next to the light switch. He opened the door to almost complete darkness, save for a small red light in the distance. He flicked the switch and light burst from the large panels that lined the ceiling, revealing a long staircase. At the bottom of the stairs was a steel door. Beside the door was a small keypad, a red light burning on its display.

“Remember sweetheart, it’s a long way down so watch your step,” he warned her.

Gingerly, he took the small girl’s hand and guided her down the stairs. As she carefully maneuvered the steep steps, the girl thought about all the things she would do with her new dog. Playing catch, walks in the park. She hadn’t even thought about what to name it. She was just so excited!  Once they reached the imposing steel door, the man punched in a few numbers on the keypad. The sound of the beeps echoed. The red light on the keypad disappeared for a moment, and a green one took its place. Smiling, the man released the girl’s hand and grabbed the large handle of the steel door and wrenched it open.

With the door open, the barking reached their ears. After a few steps, the smell hit them as well. It was bad, but the girl knew that if that was what she had to put up with to have a doggy, she’d get used to it. After several more flights of stairs and a slight drop in temperature, they touched down onto smooth concrete. The barking was much louder now. The sounds of dozens of dogs, all varying sizes and volumes. The little girl was so excited she was shaking. She immediately made a b-line for the first cage she saw and asked, “Is that my doggy?” pointing inside. The man laughed, “No, no. I’ve got one picked out special. Just for you!” He led her over to a section of the kennel towards the back.

“Now, I just found this one so he’s a little scared,” the man said.

The girl stared into the cage for a moment. After a time, her face warped with disappointment. “Why doesn’t he look right?” she asked.

“Well I usually groom them right away, but you were so excited, I decided it could wait,” the man explained.

“Probably. He’s very tired. He had a long trip.”

“Can we wake him up?” the girl asked in hushed tones.

“Just for a few minutes and then he needs to rest, okay?”

The little girl took a few steps forward and lightly rapped on the metal bars of the cage, the sound bouncing around under the high ceilings.

The little girl’s nose wrinkled in disapproval. “Well, he doesn’t sound like a doggy at all!”

The man’s eyes remained warm as he pulled a small remote out of his pocket.

“Whoever is there, I’ll give you whatever you want! You… you want money? I don’t have a lot, bu…” The voice was replaced by violent, tortured screams. The man’s eyes never left the cage as he released the pressure of his thumb from the small remote.

“What are doggies who don’t sound like doggies, sweetheart?”

“No! Only good doggies!”

“Please! I’ll do anything! Just sto…” the voice was cut off again and a reprise of screams was heard. After a few seconds, the man released his thumb once more. Only heavy, pained breathing was heard from the cage. Suddenly, loud guttural barking was heard. The little girl clapped her hands as she jumped up and down.

“Oh, thank you, Daddy! Thank you so much! I knew you’d get me a real doggy, I knew you would!”

“You’re very welcome, sweetheart. Now you go upstairs and pick out a leash. Just make sure it’s a bright color so we can find him if he gets loose at night, okay?”

“Okay!” happiness was radiating off the small girl like a space heater and she made her way towards the stairs. Past the cages of men in various states of starvation barking as loudly as they could, past the men painted black, yellow, or brown with fur painfully stitched to their skin, past the large tank of water with the man in the orange wetsuit floating at the top outfitted with makeshift scuba gear. As she put one foot on the stairs to start her ascent, she stopped. She turned around and placed a hand on the tank, watching the decaying body bob in the filthy water.

“I’m sorry I forgot to feed you, Mr. Fish. I won’t forget to feed my doggy.” Then she turned around and dashed up the stairs. She couldn’t wait to play with her new doggy.