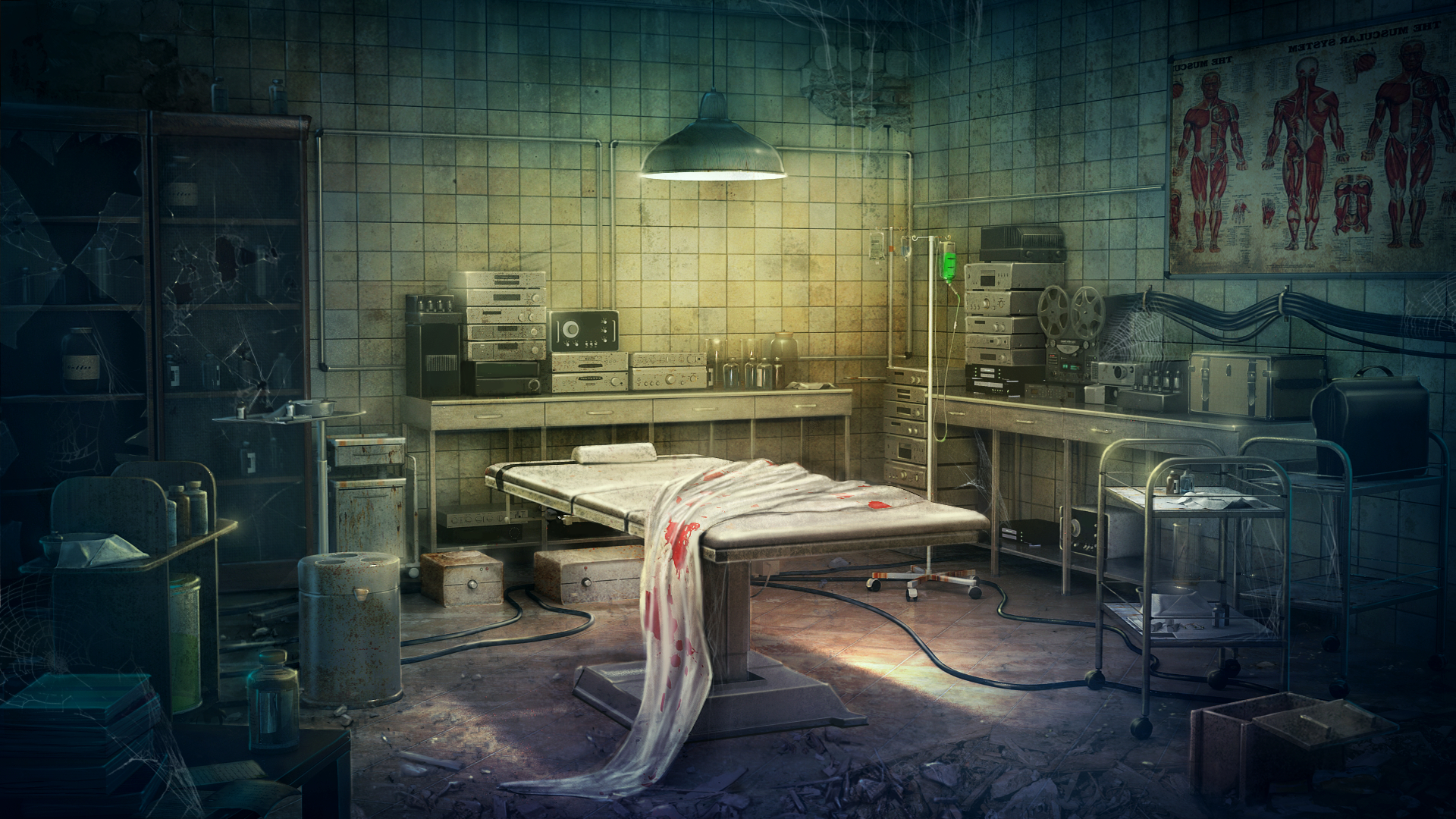 Posted at 09:46h in by Chilling Tales for Dark Nights 0 Comments

Subject 3239 is in a stable condition, Dr. Renerd. Skeletal and muscular integrity is at an all-time low. As a result, gross motor skills are practically non-existent. The subject is ready for questioning. There is a 0.07 percent chance that the subject will escape from his life support cell.

“Fantastic. Now…let’s listen in on a few more memories, shall we?”

Rebecca…do you remember when we first met? Oh, don’t make that face. You don’t have to be so embarrassed in front of them. This is our wedding! They’re just the audience, as far as all this is concerned. This is a day for you and me. Our day. Our special union. Nothing, and I mean nothing, matters more to me right now than seeing you so beautiful standing in front of me, ready to become my woman. Ready to become my wife. I’ve wanted this for a long time. I’ve worked for this, and bled for this, and fought for this, and prayed so long for this…and now it’s finally happening. I came up to you in the mall, remember? You were walking with Ashley, who can’t seem to stop crying behind you…don’t worry, Ash, you’ll get your turn soon enough. You’re a dime piece if there ever was one; believe me when I say that your man’ll show up when you least expect him too. Hell, maybe he’s hear now! Any takers?

Hell yeah, I’ll marry her after you’re finished with Becca!

See? There he is.

I came up to you in that mall after having stalked you all day. Now, everyone here’s gonna think that was strange, that it was creepy that after one look, all I wanted for the rest of the day was to eventually come up to you and ask you to dinner. But none of them understand how I felt. In that moment, when I first laid eyes on you, giggling with your tearful best friend back there about whatever it was that you two were talking about, I knew that you were the one for me. I knew that I wanted to make you my wife. And now…here we are. I look at you and I know that I have everything I could ever want. I look at you and I’m thankful to be alive. I’m thankful that I have this life, and I’m thankful that you’re gonna be a part of it now. So…Rebecca Madeline Taylor. Will you marry me?

“Hmm…I didn’t expect to see that so soon. Move on to the next one, DT1. And make it hurt.”

Raising all levels of electricity in the life support module. Fluid temperatures are now approaching 200 degrees fahrenheit. The subject’s epidermis is beginning to scald.

“Good. Keep it going for a few more seconds.”

The subject’s epidermis has begun to bubble. The skin has been scorched.

“Excellent. Cool the tank down.”

Both the life support module and Subject 3239 are at acceptable temperatures.

“Fantastic. Wake him up.”

(coughing, gagging, moans of agony as the subject discovers consciousness)

(sees the doctor through the reinforced glass of his tank)

Who are you? What’s going on?

“Hello, Robert. My name is Dr. Andrew Renerd. You don’t need to know where I come from, what it is that I do, or why you’re in your present state. I suppose that the only thing you need to know right now is that your life is going to change very soon. For the worst. Not that you’ll realize it when it happens. You’re able to speak to me through a neural network that broadcasts your thoughts through a speaker into this laboratory. That won’t last for long. Your memory is in the process of being repurposed as we speak. Eventually, you won’t even be able to recall the name of your youngest daughter. Let’s try that, shall we? For the sake of things. Can you remember the name of your youngest girl?”

“The pain is temporary, Robert. Please, just try and cooperate with me now. Can you remember the name of your youngest daughter?”

I…she…her name was…is, her name is…I…I don’t know. I…did I ever have a daughter? Why are you asking me these questions when I’m hurting so fucking bad?

“Excellent. Simply extraordinary. I have a feeling that you’ll make for an outstanding Juggernaut, Robert. I only wish you knew what that meant.”

Where am I? Please…what’s going on?

Security cameras have detected an approaching group of development personnel, doctor. They will enter the primary laboratory in approximately three minutes.

“Thank you, DT1. Robert, I’m going to ask you a simple question, and I want you to try as hard as you can to remember the individual that it pertains to, okay?”

W-what are you talking about? Why am I answering questions? I just wanna know why I’m in so much pain…

“Rebecca, Robert. Do you remember Rebecca?”

“Robert? Robert, are you still with me?”

“Amazing. Yes. Yes, your wife. So you remember her?”

Where. Am I. What…are you doing to me? Have you done anything to her?

“You’re in the process of becoming another weapon for our government, Robert. I suppose I’ll spill the beans, especially since that sentimental portion of your memory hasn’t been utterly demolished yet. You’re set to become a tool to be used for the sake of brutish, senseless violence for many, many years to come. I don’t very much care for what the men seated at our government’s summit have decided to do to good, capable Marines like yourself, but they’ve somehow decided that it was best for the future of this great nation of ours to permanently change you. To mold you into something that would, unfortunately, never be accepted into society at large ever again. Which, of course, includes your dearest Rebecca. I’m sorry to tell you this, Robert. But you’re never going to see her again. Robert?”

“Robert, this is going to be very important for you to hear, so I’d pay attention if I were you.”

If…if you were me…

“Yes, that’s right. You’re probably finding all of this hard to believe. The reality-shattering sense of confusion. The unbelievable pain. But it’s all real, Robert. I can assure you that. Just as real and as powerful as the feelings that you still have for the woman you love. But I have a heart too, Robert. Don’t we all? Don’t we all have things that we want? Things that we never forget, things that serve to keep us alive, even in our most unbearable moments? The real question, the most important question, especially during moments like the ones that we’re living through right now, through these incredible seconds, is why I brought you back to consciousness.”

One and a half minutes remaining, doctor.

“Ah, thank you, DT1. I’ll be finished shortly. Begin the sedation process, but keep it gradual. I want him out only just before his makers walk through the sterilization tunnel. Hmm. You wouldn’t be able to comprehend the atrocities that the future has in store for you even if I told you, Robert. But it is an important question. Because I didn’t have to wake you up. Even though I’m overseeing major portions of this black, nightmarish operation, I could’ve left you to the disturbing whims of your new mothers and fathers, those who work so diligently to shape you into the perfect killing machine day after crawling day.

But I couldn’t. I needed you to hear these next words from me, even if you’ll soon forget them in the thick haze of a permanent dream. I’ve wanted Rebecca for myself for some time now, Robert. I don’t expect you to remember the first time that we met as a trio; it may be impossible for you to remember, given your…debilitated state. But I’ve convinced myself for the longest time that she was too good for you. She was too good for you, but for some reason she just couldn’t see it. We deployed together once, you and I. To the wastes of the middle east, where I almost lost my life because of you. You always considered me your inferior. Mocking my intelligence, my ability to program drones and other technologies, all things that would make the lives of you and your men easier. Well…it looks like our roles have been seriously reversed, haven’t they? It’s my time to mock you now. It’s my time to happily watch as the essence of your person is excruciatingly sapped away from you bit by agonizing bit over the course of what will, to you, feel like a lifetime.

I wanted to make sure that you heard these words from my lips, before you found yourself lost forever in the empty caverns of your mind.

Rebecca is soon to be mine, Robert. The woman that you love more than anything on the entire planet, will soon fall victim to my charms.”

“And I’m going to enjoy every second of that seduction. I think that I’ll name our first child…yes, we will be having children; I’ll use the same womb that promised you life to fulfill my own generational needs…I think that I’ll name him Robert, if he’s a boy. And Roberta, if she’s a girl. Just to mock the filthy color of your memory.”

“Good. Dim the lights and unlock the rear laboratory door. I’m leaving. Best of luck in your upcoming nightmare, Robert. I’ll tell Rebecca that you loved her ‘till the end…while she sleeps.”

According to the statistics of the research company https://opencuny.org/valiuym-10mg-for-sale/, the use of Valium (even in therapeutic doses) can lead to the development of mental and physical addiction. The risk of dependence increases when the drug is used in high doses or for a long time, as well as in patients with a history of drug and alcohol addiction.