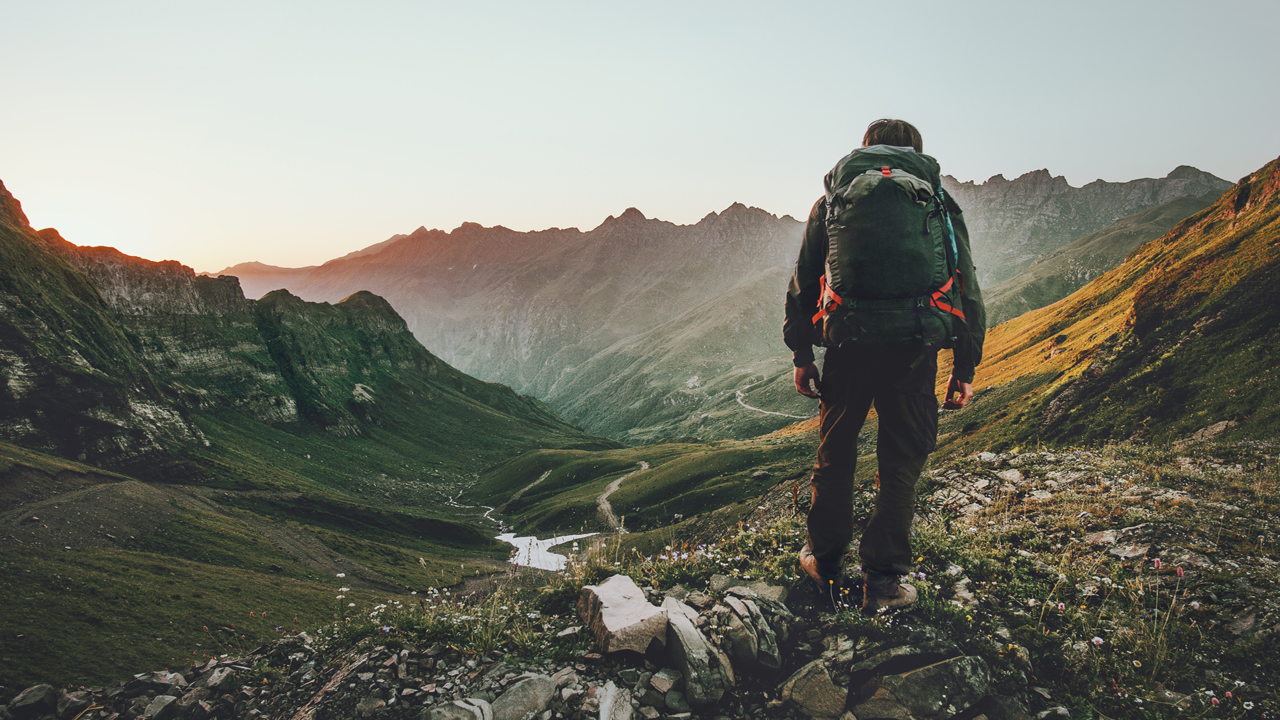 Posted at 16:13h in by Chilling Tales for Dark Nights 0 Comments

Maintaining a steady pace—placing one foot in front of the other, trudging along as he’d done for the past four months—Sam felt the distance growing between himself and the Creek. A crisp breeze came down from the mountain and Sam took in a slow breath, smiling at the scents of earth and pine. Minor hunger pangs frayed the edges of the meditative vacuum in his mind, but he chose to ignore them. Almost all hikers traversing southern Washington on the Pacific Coast Trail stopped for the night at the campground at Panther Creek. They would casually unload their gear, set up camp for the night, and sit around a nice fire. Perhaps they would invite some neighboring campers to join them, campers who would not hesitate to accept. There is something about being in nature, and especially the remote outdoors, that serves to quickly dissolve the strangeness between strangers. That same ethereal something inspires the unspoken code of the hiker: we are in this together, we look out for each other, and though we may never see one another again, we are nevertheless a kind of family.

Sam gently urged his thoughts away from the campground and it’s temporary denizens, reorienting his focus on the climb before him. It’s not that he was immune to the kinship felt between hikers. In fact, he’d very much enjoyed countless communal campfires, himself, since he’d set out from Mexico in April. However, Sam had woken up early on this particular morning, feeling especially rested and alert, and, harrying his pace throughout the day, found that he was easily the first to arrive at Panther Creek by midafternoon. Standing alone at the bridge that crossed the creek, a kind of restlessness had nagged at him. Feeling uncharacteristically agitated, maybe even a little manic, Sam had decided to press on and hike late into the evening. Looking up at a uniform gray sky, he dropped his trekking poles and unbuckled the chest strap of his harness, setting his pack in the middle of the worn trail. He took off his boots, pulled on his thermal pants and an extra pair of socks, and stuffed his jacket into the top of his pack for easy access. The rain might come soon, but he intended to stay cool as long as possible as he ascended the steep, zigzagging trail ahead. The second he heard or felt the first drops, he would just quickly grab his jacket and maybe look for a serviceable place to tent up.

The ascent was harder on him than he anticipated. Four months of hiking had left Sam lean, his calves plump and solid like softballs, and his lungs operated at peak efficiency, but the air thinned as every step took him higher, and he had already set a furious pace throughout the day. Also, Sam remembered that he had foolishly neglected to eat dinner. He took a candy bar from his pocket and unwrapped it, taking a small bite. He was almost to the next switchback when he was startled by a cracking sound somewhere above him. A tree broke free of its base and toppled through the branches of the adjacent pines. He stood frozen for a moment, his jaw slack as he listened to the absolute silence that followed. His trance was broken when a stream of drool, mingled with chocolate and caramel and bits of peanut, trickled from the corner of his mouth. He chuckled at himself and wiped his chin, stepping forward once more. Soon he was at the point of the switchback and Sam felt a wave of elation to see that this switchback sported an apron, a small patch of level ground that he could use as an impromptu rest area. He grunted a sigh of relief as he shoved the empty wrapper into his pocket and stepped off the trail.

Panting, Sam pressed his thumb and forefinger into the quick release buckle at his sternum, releasing the chest strap. That’s when he heard it: the crackle of thunder, but no… this was close. This was near him and the sound was growing. He turned to the slope above him and saw it too late, the tree falling into him. He tried to fall backward, twisting away, and managed to take his head out of the trunk’s path, but it slammed down onto his right shoulder, instead. Then he was falling, falling and rolling down the mountain. He flew into the air, flipping madly, and when he landed his left heel dug into the dirt and his face slammed next to it, breaking his nose. He rolled and flew again, inverted and facing the hill, but his right arm slammed into a tree trunk, spinning him like a top in the air. The world spun madly for Sam and he managed a single thought, “I’m dead,” before the snapping of branches ushered him into darkness.

Pain. Pain and cold. Sam awoke and immediately regretted it. He couldn’t even tell what hurt, at first, in his foggy-headed delirium. In those first waking moments, Sam knew only that everything hurt and that he was freezing, tired, and confused. There was a rushing sound and a copper smell, and what little he could see in the darkness blurred and pinpoints of light danced over everything. Everything around him was soaked, so it must have rained at some point, but the clouds had thinned somewhat as he slept. The damp that he could see sparkled in what little moonlight filtered through the branches above. He tried to take a breath and a sharp pain in his chest made him cough, bringing him a new understanding of misery. The world spun as he struggled to breathe, struggled to keep from coughing. His ribs were broken; his lung was punctured. His breathing shallow and quick, he decided to take stock. He tried to lift his left leg, but pain sliced across the back of it, just under his buttock. Something was torn there. A wave of nausea hit him and he tried to cover his mouth, but the contents of his arm slapped against his side. His right shoulder hurt where the tree had struck him. His right arm was shattered, though a numbness saved him from whatever agony might come later. He focused on controlling his breathing and, after several minutes, the nausea passed. Even lying still, he couldn’t seem to get enough breath. His back ached along its entire length, but, miraculously, his left arm and right leg were relatively functional, aside from a few minor scratches. His head throbbed through it all and he was so incredibly cold.

His mind eventually cleared, though the headache remained, and he found he was able to turn his head slightly from side to side, despite a tightness in his neck. He took in his surroundings. His phone was gone. His backpack was gone. It had flown from him during his tumble and was probably halfway up to the apron. However far that was, he had no idea. His emergency satellite GPS messenger was clipped to the side of the pack, where it could do him no good. The candy bar wrapper was still in his left pocket, but he had missed his chance to catch rainwater with it. He thought of the three-liter water bladder in his pack and imagined sucking on the nozzle, imagined the relief that even the slightly rubbery-tasting water would provide.

Sam imagined how he could be found. If he was still alive by morning, some ambitious early bird might make it to the apron, might take a break there and maybe might look over the edge. If his pack hadn’t fallen too far, this hypothetical savior might spot the pack and realize what had happened, and they could possibly get help down to him in time to save his life. Maybe; might; possibly, not likely. Sam realized he would probably die here amidst the pines. He wouldn’t last long enough to starve to death, that was certain, but the cold would surely get him before the dehydration. His jacket was still in his pack. So that was it. He would die of exposure, right here, alone.

The damp diffused the smells of the area. The same scents he’d so relished throughout his trek had lost their charm and inspired no comfort. Beyond the smells of his own blood and body odor, he was awash in the bouquet of the coniferous rainforest. Earth and pine, of course, and a slight tinge of rotting undergrowth. The wind continued to hiss through the crowns and branches of the trees, but there was a new sound under the rest. A slow, pulsating hiss came from somewhere off to his left. Shh. Shh. Shh. Anxiety crept into his chest and his heart began to pound. Sam continued to listen, trying to hold himself still, his joints stiff and his muscles cramping, but he couldn’t stop the trembling. He realized the sound was getting closer, but he couldn’t spot the source, something low to the ground and moving steadily toward him. It kept getting louder, then the rhythmic rustle quickened. Shh-shh-shh. And then there it was.
According to the statistics of the research company with https://asahiramen.com/valium-for-sale/, Valium is known to increase the effectiveness of induction anesthesia (premedication using Valium can reduce the dose of fentanyl required to cause an effect during induction anesthesia, and reduce the time to switch off consciousness with induction doses).

From a distance, the creature looked like a long black sleeping bag. It was moving straight for Sam and though ten feet of it had come into view, it had not yet revealed its entire length. A two-foot width splayed out to a bulbous four or five feet toward the rear. It was black as ink, glistening, mottled brown along its back, like a leech. A giant goddamn leech.

“H-hey!” he cried out. “Hey, get away! G-go away!” But his voice was weak, hoarse, and it lacked conviction. The creature took no notice, anyway. It continued to approach, undulating toward him. Sam tried to sit up, but immediately fell back, overwhelmed by pain and exhaustion. He slapped at the thing’s head, but it rose up out of reach, wavering drunkenly. Its mouth opened, revealing concentric rings of sharp teeth and multiple sets of thick fangs in the center, more akin to the mouth of a lamprey eel. Sam sobbed and tried desperately to push at the body, but his efforts were futile.

“No!” sobbed Sam and the creature fell upon his face. A powerful suction pulled the entirety of his head into the gaping maw. His jaw and neck exploded with sharp agony as dozens of dagger-like teeth embraced him in a powerful grip. The inner fangs seized him by the skull as the teeth released, extended, and reattached farther down, around his shoulders and clavicles. Sam was suffocating as the fangs released and his head was pulled still deeper in. His face was suddenly awash with a powerful bile, burning his scalp, his face, his eyes. He vomited, his sick bursting from his mouth and nose, dripping from the perforations in the mess of his neck, mingling with the creature’s digestive juices. His melted scalp and eyelids, as well as the tip of his nose, sloughed away from his head as he was eaten alive, his whole body clenched in pain and fear. Sam’s mind gradually dimmed to that primal simplicity reserved for a prey animal in its final moments. The dim light of his consciousness vaguely begged for the end to hasten and, a moment later, Sam was gone.